The beautiful city of Merida is the capital of the State of Yucatan.

Founded in 1542 by the Spaniard Francisco de Montejo over the ruins of the Mayan city, it received its name to evoke the conquerors of the city of Merida in Spain. The Cathedral of San Ildefonso was founded with the huge stones dismantled from the pyramids.

Merida is known as the White City, nowadays one of the most tranquil and safest cities in Mexico. Her remote Mayan roots, superb colonial monuments and the splendor of her turn to the XIX century architecture, has made Merida a captivating mixture of cultural influences.

La Casa de Montejo (Montejo’s House). Located south of the main Plaza, its the most important non government building, distinguished because of its plateresque style.

Cathedral. The elder in the American continent (1556-1599); with its beautiful mozarabic-style towers and the great 7-meter high image of a Christ.

Canton Palace. The museum is located on the main avenue of Merida, the Paseo de montejo, on the corner of Street 43. Its headquarters are in one of the most imposing buildings of the city, designed by the Italian architect Enrico Deserti. It was built in the first decade of the 20th century, to be the residence of the ex-governor of Yucatan, General Francisco Canton, under the direction of the Yucatecan architect Manuel G. Canton Ramos. Its majesty earns it name Palacio Canton (Canton Palace). At the time, the palace formed part of an urban project to move away from the old-style network of city streets, by the designing of avenues leading outwards. The building was the first in Merida to include in its design many of the electric elements in vogue at the time like ironwork and marble. Along with other residences along the avenue, it constitutes a symbol of the wealth generated by the production and commercialization of heneken. The Canton Palace unites its attractive architecture with an extraordinary number of archaeological treasures, one of the most important collections on the development of Pre-Colombian Mayan culture in the Yucatan Peninsula. In the vestibule there is a history of the building and five enlarged reproductions of the 19th-century lithographs of Frederick Catherwood, published, by John Lloyd Stephens in his famous work Travels to the Yucatan, which brought the Mayan Culture to the entire world. Moving along, you can become acquainted with the environment of the peninsula, and with the oldest evidence of human existence found here, from the cave at Loltun. You’ll also learn about the physical aspects of Mayas of the Yucatan and their customs for decorating and modifying their bodies, according to their esthetic criteria. The following rooms exhibit elements of the evolution of Mayan society: production, commerce, war, writing and calendars, architecture, customs, rituals, and funeral offerings. The passages of the building are dedicated to exhibiting the magnificent mastery of the Mayan sculptors. The first floor of destined for seasonal exhibits about the Mayan Culture and the history and art of other peoples.

Macay Museum, The Macay is located in the building which was the old “Peninsular Athenaeum” whose construction goes back to the beginning of the time of the Spanish conquest.

Monumento a la Patria (Monument to the Fatherland). Where the sculptor Romulo Rosso shaped the history of Mexico.

The El Centenario Zoo, where the city 200 is found.

The traditional Paseo Montejo, designed to emulate the Champs Elysees, will delight with its three-story mansions with their balconies, harmonious lines, vivid color, and pointed tower.

60th Street. A stroll down through this enchanting street reveals beautiful parks and buildings, among them the Hidalgo Park, the Autonomous University of Yucatan, the Church and Park of Santa Lucia and the Peon Contreras Theater.

Jose Peon Contreras Theater, built-in 1900, with its white marble stair, and its seats decorated in a Rococo-style.

The zone of the Markets where you can buy the typical huipiles, guayaberas, filipinas, henequen carpets. Here you can visit the outstanding markets Lucas de Galvez and the Portal de Granos.

In downtown Merida you can enjoy popular shows from 9 o’clock pm during the week. There is also a great variety of good restaurants where you can enjoy the regional cuisine and excellent plates such as cochinita pibil and deer meat. 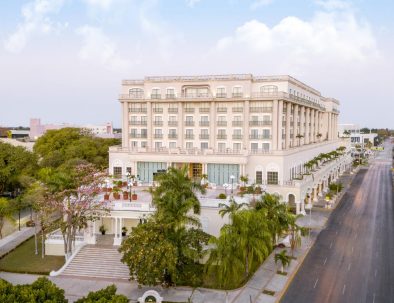 Merida
Hotel offers the best facilities for business meetings, social gatherings, group functions and conventions as well as those for a perfect vacations
5 Stars
City hotel 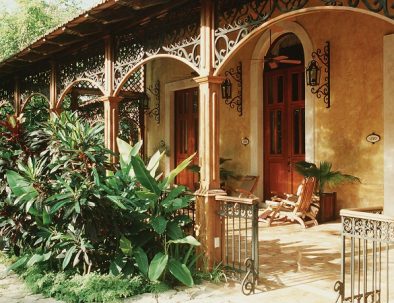 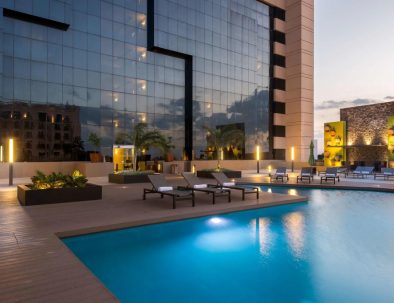 Merida
Located in the heart of the city, our hotel in Mérida, Yucatán, is at a key point where the commercial area and the tourist area of ​​the city converge
5 Stars
City hotel
All hotels

No data was found
All excursions